A few weeks ago I spotted this rather barren-looking area on Victoria Road, opposite St Luke’s church. Using Google Street View I found that there was once a buddleia bush in this space, and from old bolts in the ground (in the concreted part in the bottom left of the photo) it looks like there was at one point a bench, too.

I called upon the Cambridge Guerrilla Gardeners group to see whether any of them wanted to have a go at sprucing the patch up – and Agent “A” came to my aid.

The first hour or so was spent digging the ground, and removing a fair bit of buried rubble (to add to the pile of not-buried rubble you can see in the corner)

I dug a couple of sacks of manure in to help the future plants on their way. “A” brought loads of plants – hellebores, passion flower, Japanese anemones, irises, geraniums, phygelius, and more. I’d brought along a couple of giant scabious, some pansies, violas and dwarf tulip bulbs.

By the time it was all planted, it was dark – but the whole thing actually took less than two hours.

In the UK, [most] road signs use the font Transport, designed by Jock Kinneir and Margaret Calvert in the 60s. For light lettering on a dark background, “Transport Medium” is used; when dark lettering is on a light background a bolder form is used instead: “Transport Heavy”.

I got a version of these fonts here: http://www.cbrd.co.uk/fonts/.

What I’ve done when replacing missing letters on signs is:

(A note on street name signs (e.g. “MILTON ROAD”): many (in Cambridge, at least) use the Kindersley font – and I got a version of that here: http://www.kindersleyworkshop.co.uk/type-design/).

Cambridge has loads of benches in this style – metal sides and then a number of long wooden slats. I’ve repaired two – here’s what the second looked like beforehand :

Many of them are Wicksteed’s Huntingdon range (it’s embossed on the metalwork), with either hardwood or softwood slats.

Some of them have missing slats (where they’ve been broken or rotted away and discarded). I couldn’t find a way of buying replacement wood of the correct size (other than perhaps buying spares from Wicksteed), so I set about making them myself. To make them more durable, I chose larch wood – which I got from Cottenham Sawmills (check them out if you’re after fencing etc).

As I said above, I’ve done two benches so far – two slats on one of the ones opposite the Botanical Gardens on Trumpington Road, and three slats (two at first, then another one) on the bench by the bus stop by Hazelwood Close on Histon Road.

For each slat, I had to plane the wood down to 54mm x 34mm (approximately), cut it to 2m length, and round the top edges. For the second bench, I borrowed a friend’s circular saw instead of using a plane.

I then treated them with a clear preservative, then several coats of Sadolin Superdec opaque woodstain. (The first bench I did with a translucent lighter brown Sikkens stain, which was a nice finish but didn’t blend in!)

Depending on the bench, the slats are either fixed in place with M6 roofing bolts (with cross heads) or with M8 coach bolts (with the plain domed head).

And here’s the second bench with its new slats :

The recent lighting works left several large bare areas of earth, which I had been keeping clear from the return of bindweed, nettles, brambles, in order to plant something there.

But I think it might be better if I leave those areas to regrow. The lush green-ness of the areas that are still overgrown by bindweed and brambles etc (the areas that weren’t disturbed by the council’s digging) is actually quite nice – better than bare earth, certainly – and I think making the underpass strip look “tidy and formal” by removing everything I designate “a weed” might not actually be a good thing. I’m not sure. Maybe something a bit more “cottage garden” is in order.

It is important that the path doesn’t get obstructed by brambles, but other than that I’m not convinced it’s necessarily an improvement to strip out vegetation in order to replace it with different vegetation. Hmm.

Anyway, I’ve just planted some autumn- and some spring-flowering crocuses – let’s see how they turn out, and maybe I’ll leave it there for this year.

Below is a “map” of the length of the “flower” bed down the side of the Milton Road underpass. In the table, I’ve divided the bed into 3m blocks (using the 3m concrete blocks at the top of the retaining wall for the roadway). The bed ranges in width, but on average it’s about 1m wide. In this diagram, the wall is on the left, and the underpass gets deeper further down the table. Plantings so far in bold. The bed gets the sun for part of the day, but becomes more shaded further down the slope.

There are several areas of bare earth as a result of recent digging by the council’s lighting installation contractors – and which had started to be taken over again by re-growing bindweed/bramble/nettle root fragments. I’ve dug most of these out, now, so it’s ready for replanting if I/we should so wish!

Planting suggestions welcome. I’m wondering about a wildflower mix for the bare area at the top that gets the most sun? (leaving the grass at the very top alone). Low-maintenance hard-to-kill plants would be good!

Also I would be glad of help clearing the existing weeds (although maybe let’s plant things in the bare areas first?)

Following feedback from a number of people, I’ve decided that for now, I’ll just repaint full stripes on the DNA cycle path – and limit myself to just the ones that have been completely (or almost completely) eroded (of which there are a fair few). This avoids the “touched-up” look, and also makes the job smaller in scope, since I’m not doing all the little chipped corners/edges (which take ages to mask up).

Here are some full stripes in yellow that I did at the weekend:

DNA again. By pop. demand, full stripes at once for neatness, just doing the [almost] gone ones. Better yellow, too. pic.twitter.com/5l8yASv7BY

These ones turned out well 🙂 (needed my handy gene printout to look up the completely one) pic.twitter.com/1wWAA4Rv8e

I’m pretty pleased with how it looks. The masking was much neater than I expected: the lines are really crisp. I think this yellow is OK as a colour match, when it’s full stripes – and this yellow (by Blackfriar) is a better match than the brand of yellow (Plasti-Kote) I was using at the beginning, which to me looked brighter:

Repainting chipped stripes on @sustrans DNA cyclepath between Addenbrooke's and Shelfords. (Guanine only for today!) pic.twitter.com/qvVij7HIMT

I still have quite a lot of the green left, which I think will be a good enough match to look OK as full stripes. For blue, I can use the Screwfix brand (which is a good match for the original blue) but I still have a lot of the (bolder, less-pale) Blackfriar blue left, so I’ve been having a go (in my garage) at colour-mixing to see if I can make use of the remaining blue first rather than it being wasted. I also have lots of red, which I’m similarly hoping I can avoid wasting. If anyone has a knack with paint mixing, do let me know!

Doing only full stripes (and only those that have completely eroded) does have the disadvantage that partly-disintegrated stripes will often be left alone, but I can live with that for now. I don’t really want to overpaint stripes where the existing stripe is still largely intact – I think the joins/overlaps would look weird, and if possible I’d rather not be “replacing” or obscuring the original art.

I think it looks better than doing nothing at all, and I think it’s better than touching up “haphazardly” – which is what I started off with, and which looked like this (shield your eyes!):

But I definitely get his concern, the new paint looks almost garish by comparison with the faded stripes, I know pic.twitter.com/XRl3ydWHtk

So then, what do you think of the “full stripe” approach? 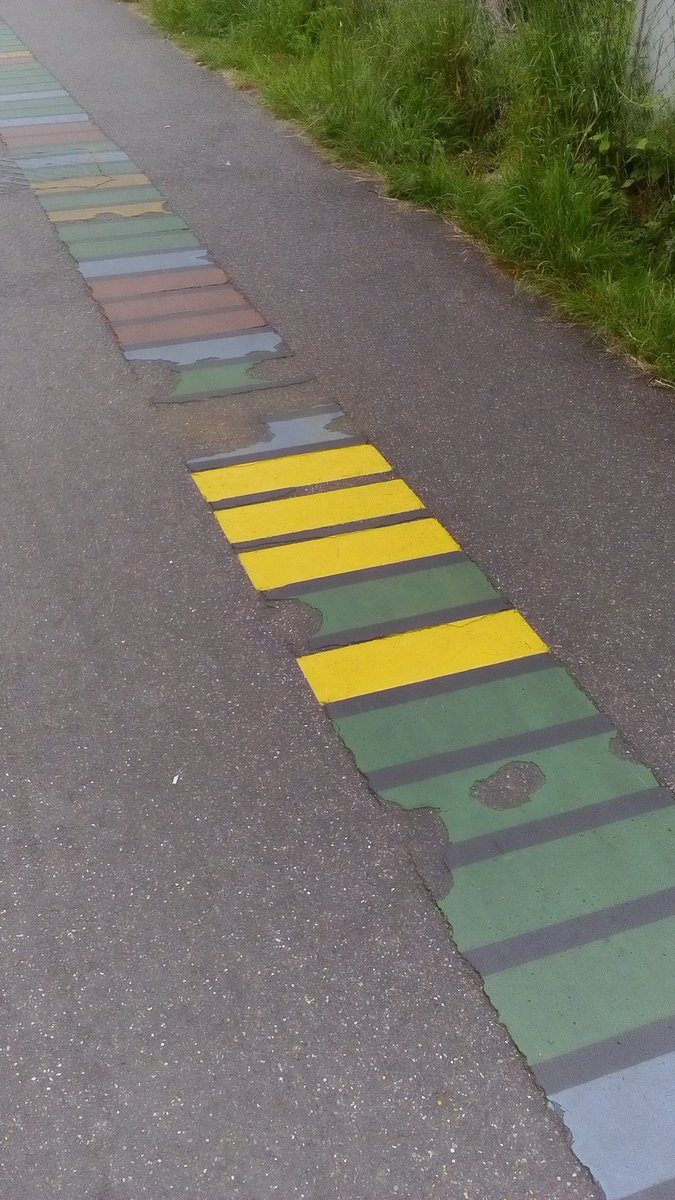 Here are some conclusions I’ve come to about what I want to do next on the DNA cycle path. Thanks to everyone who’s responded here and on Twitter.

– In my opinion, the green and the paler blue are a good enough match to keep using as-is. Does that sound reasonable?
– It might be best for me to focus on the stripes that have almost disappeared – both in terms of priority and also because it means I can repaint the whole stripe at once. As Colin said, there’s a particularly bad section near the northern end.
– As Joe suggested, I may experiment with sprinkling fine sand onto the wet paint, for better grip and to take the edge off the brightness. I did a trial of this yesterday using a lump of old tarmac and the red line-marking paint – it’s not perfect but perhaps worth trialling further:

– Several people have shared my feeling that the appearance of having been repaired (provided it’s tasteful and not garish) is actually somewhat appealing.
– I obviously can’t please everybody, but my general impression is that people like that I’m doing it, so it would be nice to continue if possible (even if that doesn’t make everyone happy) rather than leave it to wear away.